Mohanlal’s Drishyam 2 was a hit on OTT platforms

The pandemic has changed the concept of cinema and the way a film is sold in South India. OTTs have become a way of life for Tamil and Malayalam film producers, while Telugu and Kannada films are still rooted in the world of cinema. When cinemas were closed for a long time in Tamil Nadu and Kerala (still closed) during the pandemic, mainstream cinema switched to OTT platforms. Superstars like Suriya in Tamil and Mohanlal in Malayalam cinema enjoyed huge success when their respective films premiered Soorarai Pottru (2020) and Drishyam 2 (2021) on OTT. And Fahadh Faasil has become an OTT superstar with films like CU Soon (2021), Joji (2021), Malik (2021) and a few others.Suddenly, in commercial cinema, stories were budgeted and written with the new wave of OTT audiences in mind.

Renowned filmmaker and producer Mani Ratnam, who has produced exclusive content like the Navarasa anthology for Netflix, says, “This is the future and growth. There are a lot of ideas that don’t fit into a feature film format. OTT opens up different ways of telling stories, big and small. At the same time, I feel that the OTTs and the theatrical experience will coexist.

Senior Malayalam producer Anto Joseph says, “OTT has given filmmakers and their audiences a more diverse range of viewing options. Their reach is phenomenal and they have also attracted other much-needed viewers who seem to enjoy Malayalam content with the quality subtitles. Karthick Naren, a young short filmmaker turned director in Tamil adds: “OTT definitely attracts a younger audience because they can relate to the content. I did one of the Navarasa episodes for Netflix. The type of response my Agni project got in the web series has been overwhelming and very satisfying.

The most important factor is that OTTs do not have to follow a “normal business format”, and can be different, which has created new audiences. A commercial hero like Arya had his greatest success as an actor and star with Sarpatta Parambarai, directed by Pa Ranjith, which premiered on Amazon Prime Video to receive rave reviews. It is said to be the most watched Tamil movie to date on OTT platforms. The OTTs have also created their own stars, measured by their performances and the roles they play, like Faasil, who has not had that kind of success in the theater. In the past year, he’s had four OTT firsts, which has given him phenomenal reach. Actor Uday Mahesh, who was unknown before The Family Man 2’s “Chellam sir” is all the rage today and is inundated with offers. Another reason OTTs have become a craze in the South is the connectivity factor: Internet penetration and the proliferation of smartphones in Tier 2 and 3 cities.

Malayalam films have had the most consecutive premieres in South India on OTT platforms.

Movies like CU Soon, The Great Indian Kitchen, Irul, Joji, Malik, Cold Case, Home, Kaanekkaane and many more have had direct OTT release. It’s the hottest market for OTT live premieres as cinemas have been closed for the past six months due to Covid.

In fact, Malayalam has a dozen small OTT platforms that source content and publish it, thus proving to be a godsend for films not picked up by the OTT giants. 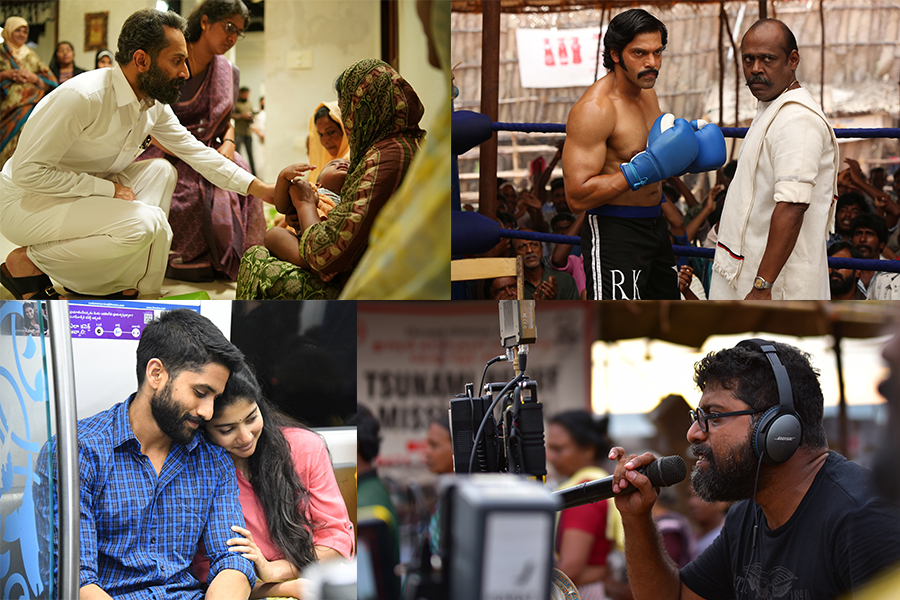 (Top to bottom) Malik by Fahadh Faasil and Sarpatta Parambarai directed by Pa Ranjith were also successful on OTT platforms; The love story of Naga Chaitanya and Sai Pallavi brought Telugu audiences back to the big screens; Mahesh Narayanan, director of CU Soon, which aired on Amazon’s Prime Video

OTT platforms are snapping up Malayalam movies faster than any other language movie, as they have been accepted outside of Kerala among non-Malaysians. This has created a production boom as more and more big-budget theatrical movies head to the OTT path. Tovino Thomas’ highly anticipated superhero film Minnal Murali was recently picked up by Netflix. Mahesh Narayanan, the director who started the trend with CU Soon, says: “A churn has taken place thanks to the OTT revolution which takes place while theaters are closed. Malayalam cinema is in the right space where content is king. What has worked is the growing number of non-Malaysian viewers around the world. The subjects are different and rooted in the local milieu, and OTT has also brought about changes in writing and stage compositions.

Southern states traditionally have the largest cinema audiences in the country and the most unique screens in India. Of the roughly 9,500 screens in India, before the pandemic, 50% are in the five southern states. Akshaye Rathi, an exhibitor in Maharashtra, Madhya Pradesh and Chhattisgarh, says: “Today, South Indian cinema and the strong film culture there are ahead of the rest with good content, mass heroes with a huge fan base and strong marketing. Hindi cinema, with the exception of Salman Khan and Tiger Shroff, does not produce the kind of mass movies directed by South Indian superstars that reach audiences of all classes. When cinemas closed during the pandemic, much of the audience – read young people – switched to OTTs, with their diverse content. After the first pandemic wave when theaters reopened earlier this year, it was Vijay’s Master, a mass artist, who came to their rescue. After the second wave, cinemas closed again in April and reopened in late August in Tamil Nadu.

But theater collections at 50 percent capacity have yet to be recovered in Tamil Nadu; in Kerala they are still closed. The theatrical collections of the Telugu states (Andhra Pradesh and Telangana) have reverted to somewhere near the pre-Covid era, as evidenced by the phenomenal opening of Naga Chaitanya and The Love Story of Sai Pallavi, directed by Sekhar Kammula. The film grossed a whopping Rs 25.4 crore in Andhra Pradesh and Telangana alone.

Cinema remains the most powerful cinema release platform in Telugu States compared to the rest of India. But Tamil Nadu, Kerala and Karnataka have not shown the same taste for the theater. In Tamil Nadu, the trade is betting big on the release of Diwali – Annaatthe by Rajinikanth – and on Pongal (January 2022) – Valimai by Ajith Kumar – to bring the public back to theaters. Until then, Tamil will have small and medium hero movie releases. 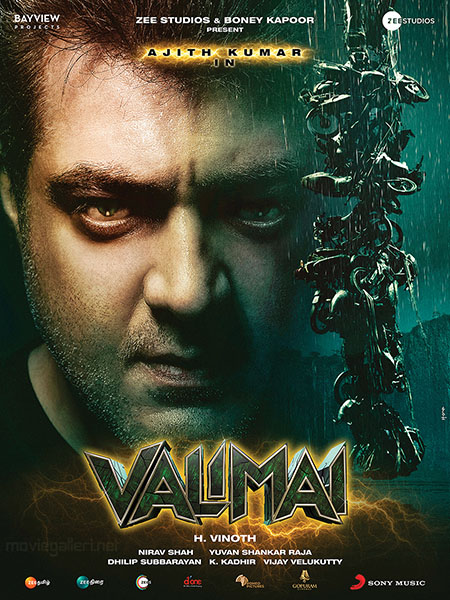 Ajith Kumar’s Valimai is due out in January 2022, during Pongal, and is expected to bring audiences back to the cinema

Each year Tamil produces around 200 films, but this year the production will go down. More and more movies with a “salable hero” or “different content” are being previewed on OTT platforms. But the problem is that the big OTTs are only interested in cream, and only buy 40 to 50 films a year. For the rest, the only way out is cinema and satellite television rights.

G Dhananjayan, producer and distributor, said: “After the second lockdown, Kodiyil Oruvan, the film I distributed brought audiences to theaters. Initially, no OTT was willing to buy the film, but after it became a hit in theaters, digital rights are now hot. However, after the second wave, the way the films were viewed changed as the collections are only valid on weekends. This poses a challenge to the trade, but we hope that the festival, the films of big stars will increase the collections. “

All major South Indian players, especially Telugu stars, are supporting theatrical releases. They haven’t fully switched to OTT and have one foot in the theater. The stars know that it is their “box office odds and collections” that have made them mass heroes. South Indian stars with political ambitions can’t even think of a non-theatrical release, as fans, celebrations and box office numbers are crucial to their longevity. In OTTs, there is no metric to measure their star power, the notion of a star’s success cannot be assessed. The subscriptions and number of views that a particular movie generates are never made public by OTT platforms. A spokesperson for a leading OTT platform said, “We’re here to build a solid, quality content library. All over the world, in OTT, there are no big stars… there is only good content reaching the whole world. The beauty of OTT is that anyone can come from anywhere and be recognized overnight with a show or movie.

OTT platforms are an integral part of the entertainment ecosystem and are here to stay. In the future, the theater will have to coexist with the streamers. Now the controversy is whether the window between cinema and OTT should be narrowed even further. Before the pandemic, the powerful multiplex lobby maintained the eight-week window between theatrical releases and OTT. It came down to four weeks (28 days) when theaters reopened after Wave 2, with Akshay Kumar’s Bell Bottom. But the multiplexes refused to play Kangana Ranaut’s Thalaivii because the producer had lowered the window to two weeks, before its premiere on Netflix. You have to wait and watch how the future unfolds, but overall theaters and OTTs will grow as the entertainment industry evolves.

The author is an entertainment industry tracker.

Click here to see Forbes India’s full coverage of the Covid-19 situation and its impact on life, business and economy

(This story appears in the October 22, 2021 issue of Forbes India. You can purchase our tablet version at Magzter.com. To visit our archives, click here.)